In 1930, the horror of World War I was still fresh in Europe's memory. Trench warfare was an agonizing form of combat. Soldiers could die from artillery or lose a leg from standing in the mud too long. Today, the body count is almost unimaginable. Twenty million people were killed. France was sure that history would eventually repeat as there were no natural barriers on its border with Germany. Determined to defend themselves, they conceived The Maginot Line – a strongly fortified array of steel and cement bunkers, forts, and minefields stretching 280 miles. It was the mother of all trench lines with defenses, firepower, and living conditions light years ahead of those in WWI. In May of 1940, the day they feared finally arrived as Hitler ordered a land invasion. With this marvel of construction housing the best of its military, France was more prepared than at any point in history. Yet, after a decade of preparing their defense, France capitulated in just six short weeks and Hitler's forces took control of the country. All of their planning failed miserably. Since World War I, Germany's tactics evolved with technology. Instead of engaging in a war of attrition, they utilized maneuverability and radio coordination between air and ground forces to circumvent the line and outflank their opponent. France relied on assumptions that were no longer valid. While they were busy improving the old plan, Germany had devised a new one.

One thing that can always be relied on is human nature. Recent history gives us confidence about how best to proceed today. It is natural to look to something that has already worked for the best way to succeed in the future. But the world continues to evolve. Today, capital markets are at an inflection point not seen in over forty years. Risks are rising for investors using plans based on recent history and assumptions that may no longer hold.

The typical saver has a portfolio consisting of a mix of stocks and investment-grade bonds. The stocks generate growth while the bonds provide safety and income. The standard playbook is to hold a higher weighting of stocks when you are young and can afford the risk while rotating towards bonds as you get older. An attractive feature of this strategy was its balance. When recessions hit, and stocks went down, bond prices typically rose with falling interest rates to offset losses. Indeed, one of the most favored strategies among investment advisors has been the classic 60/40 mix. It has been a great success - producing solid long-term returns at moderate levels of risk. Over the last twenty-five years through April, a 60/40 mix of the S&P 500 and the U.S. Aggregate Bond Index has returned nearly 7.2% annually1. An excellent outcome for the average investor. 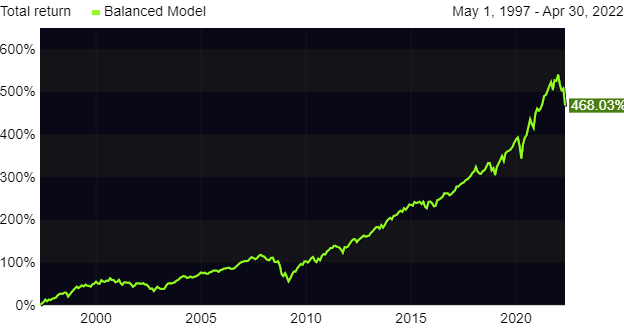 With such an attractive record, it is no wonder that the investment industry moved to capitalize on its success. There was no need to build a better mousetrap. The focus shifted to lowering costs and expanding access with a proliferation of new products. Good returns and low expenses were very persuasive and kept both investors and advisors happy. The money has piled in:

These products all have one thing in common. Their success assumes that what has worked recently will continue to do so. But are they still the best choice going forward? That is impossible to know for sure, but we know that the conditions providing a tailwind for these products are disappearing.

So precisely what changing environment are we talking about? In our economy, interest rates represent the cost of money. Higher rates hamper the economy by making it tougher to borrow, leading to reduced spending and investment. Lower rates stimulate spending and investment in people and capital – all of which boost growth. The Federal Reserve Bank uses monetary policy to influence rates. We have benefitted from generally declining rates for a very long time. The Fed Funds Rate peaked at 20% in 1981 and has been on a downward trajectory ever since. The target rate bottomed between 0.00% to 0.25% from 2008 through 2015 and again in 2020. On top of this came an unprecedented amount of borrowing to combat Covid-19. These factors overheated the economy and woke inflation up from a long slumber. Add in a war in Europe and we are seeing the largest price hikes in decades. The Fed must adjust policy to get it under control. In fact, they have already begun. 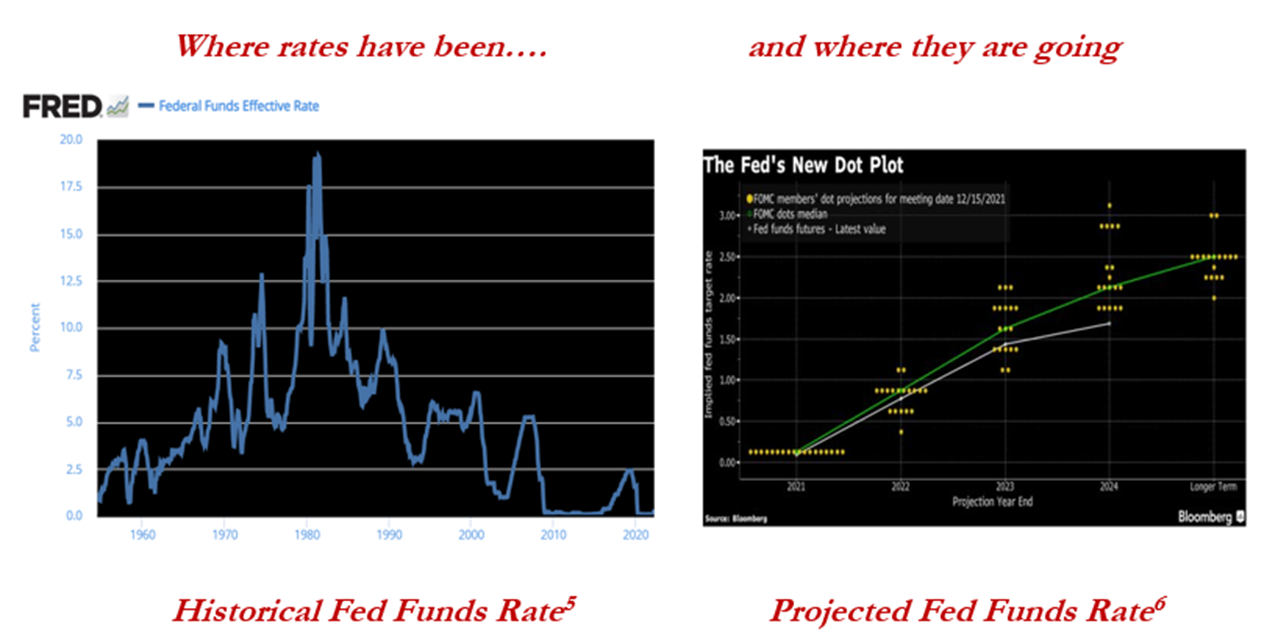 The graph on the right details the Federal Reserve’s expectation for the direction of interest rates. Several economists think this projection underestimates how aggressive they will need to be to dampen inflation.

What risk does this pose to your portfolio? Our central bank is trying to slow down the economy. Ideally, The Fed will find the sweet spot and tighten policy just enough to cool down inflation without putting us into a recession. However, this is difficult to manage, and stocks are likely to drop if they overshoot their goal. Bonds have a more mathematical relationship to interest rates. Due to their fixed interest payments, the value of bonds falls when rates rise. We now have solid evidence that rates are rising. If rising rates cause the next recession, we are setting the stage for both stocks and bonds to drop in value at the same time – a painful scenario for investors.

The market is already adjusting to this possibility. From the beginning of the year through April 2022, the S&P 500 and U.S. Aggregate Bond Index returns were -12.9% and -9.5%, respectively. How rare is this occurrence? We have not experienced a trailing four-month period with significantly negative returns from both of these assets since May 1984 and September 1981. We would be wise to acknowledge that the investment backdrop is changing, and strategies that have succeeded recently may no longer be the best choices moving forward.

One of the most common things you read on financial advisors' websites is how they customize an investment plan tailored to your specific needs. Given that so much money has piled into similar vehicles, how can everybody be getting a genuinely custom portfolio?

The explosion of new products has benefitted investors but it has also put many plans on cruise control with generic asset allocation strategies driving money into the same holdings. However, monetary policy is reversing in a manner that few investors or advisors have ever experienced. It is time to reassess whether the most common strategies are still suitable and construct portfolios built for what lies ahead.

Without completely abandoning the benefits of a traditional stock and bond portfolio, we can create a more thoughtful mix better suited for today. We recommend a more diverse mix for balanced portfolios, including assets more likely to grow and protect wealth under current conditions. 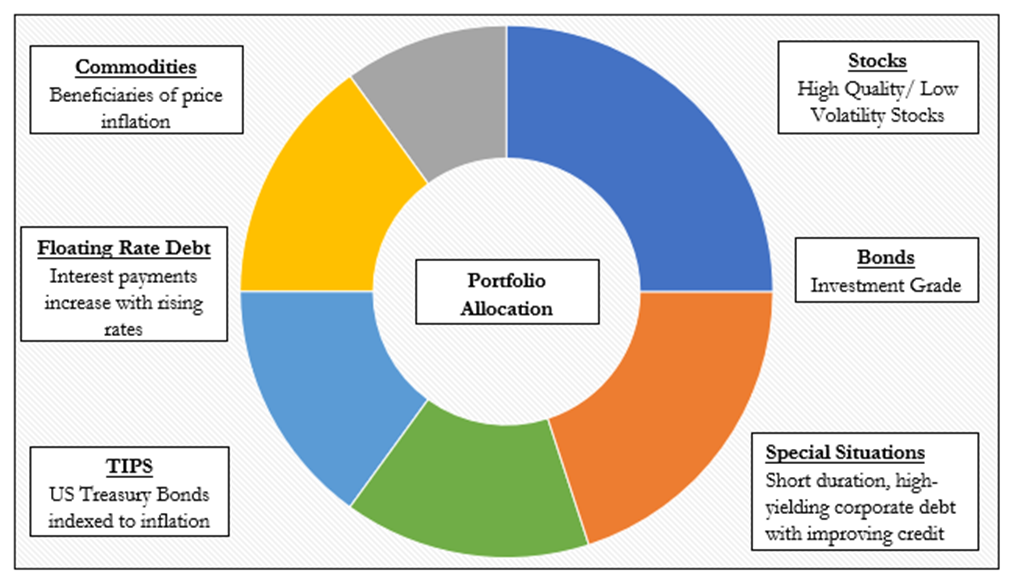 Retirees should also re-think solutions for safety and income. Yields are still low and the higher risk profile for bonds makes them a less prudent choice than in the past. To combat this we have designed our High-Income strategy. It focuses on high-yielding securities from multiple asset classes combined with hedge positions that reduce risk. This strategy produces income levels at rates comparable to previous decades while also providing downside protection in rising rate environments.

The investing landscape is always changing and we can never know for certain what is coming next. We can, however, take heed of events that signal a meaningful change in conditions. When we see one, it is critical to determine whether that change invalidates the old plan and if so, identify solutions better suited for the new world. The reversal of a long trend in central bank policy is one of those signals. Now is the time to consider adopting new strategies or risk getting stuck in the mud.